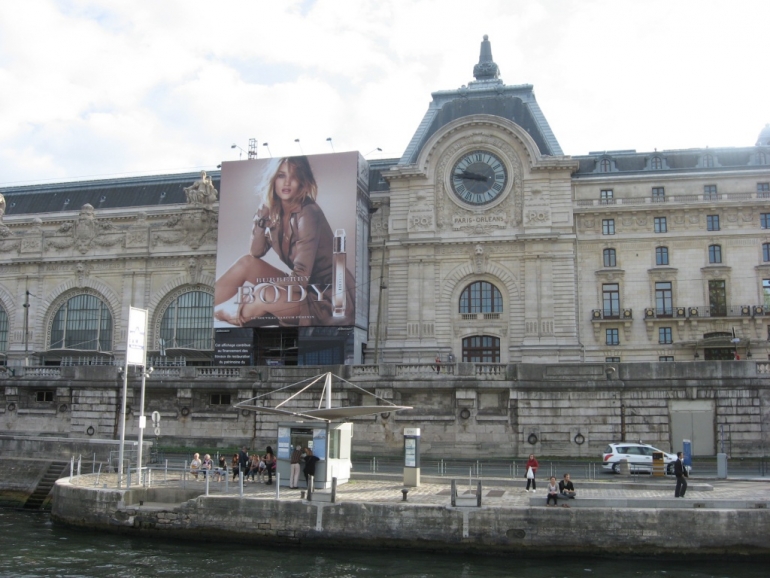 The masters of large forms

Crisis is not only a time of loss, but also a time of opportunity. Those who quickly navigate the situation and offer a convenient communication channel to the consumer will win as a result. Business decline will undoubtedly affect the advertising market, especially outdoor advertising. But it is not a reason to get discouraged and feel down. A civilized way out of this situation is to gradually change annoying billboards and light-boxes to large-format construction like brandmauers, large advertising screens, facade brandings and rooftop advertisings.

It is important to move away from the usual standards and think outside the box. A sated consumer reacts poorly to the conventional advertising forms. He is tired of smiling faces, jumping figures and inscriptions which are shoved to him by the outdoor advertising market. Today there is a demand for non-standard approaches. In developed countries, they are already being implemented on a full scale. We also have the first signs of new trends.

Peace to brandmauers, war to boards

In modern developed cities, the number of billboard advertisings is gradually decreasing. This is due to different factors. The speed of life in metropolitan cities does not allow people to concentrate enough attention on billboards and, as a result, the effectiveness of such advertising campaigns is decreasing. Billboards cause inconveniences to drivers by blocking street signs and traffic lights. Their excessive concentration deforms the surrounding space, as they do not fit into the context and appear as foreign elements on the city’s body.

But is there an alternative? World experience has shown that the best alternative is placing large formats - brandmauers, roof constructions, large advertising screens, multiboards. They can be harmoniously combined with urban space. Large-format advertisings can take many different forms and adapt to a variety of urban conditions. All cities - both historic villages and huge modern metropolises - are obedient to it.

Keeping up with history

Ironically, large formats fit very well with historical architectural environment.  Not only does it not ruin the appearance of a monument, but on the contrary, it attracts tourists' attention to it. And, of course, advertisers keep on staying big winners. Not to notice an advertised product on such background is difficult. Even the holy of holiest of Paris - the Louvre - has not escaped this fate. The perfume advertising on the brandmauer blends in perfectly with the building’s facade. 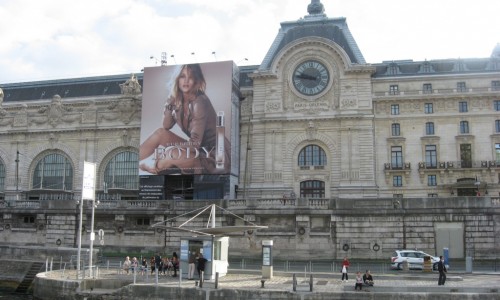 It also appears on the cathedral in Milan. Since the temple is being renovated, the brandmauer covers a part of the building, which is going to be reconstructed. Moreover, the residents think it is a normal phenomenon. 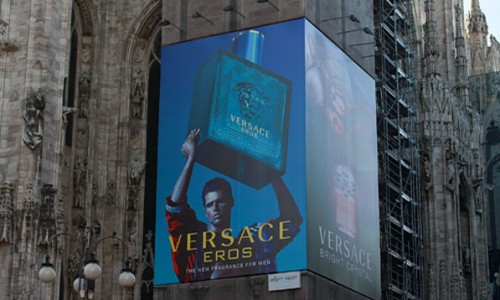 Even more, they see obvious benefits in it for themselves. After all, urban communities do not always have enough funds to maintain a monument of architecture in proper condition. Placing advertising brandmauers on these facades gives additional funds to municipal budgets. Tourists can admire the wonder of the architecture because of these funds. Thus, large-format outdoor advertising is a sponsor of the cultural and tourist industry in Paris and Milan. Moreover, such cases are not exceptional. 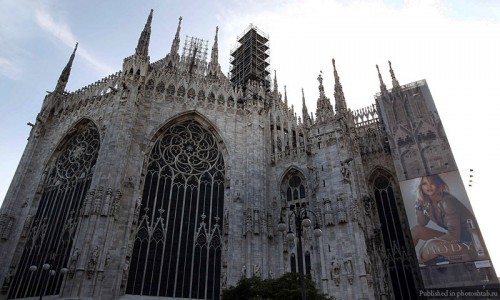 Such experience is very useful for Kyiv and other cities where historical buildings are still presented. Lack of funds for restorations lead to the fact that many facades of buildings look unpresentable, to say at least. By covering at least some of them with advertising banners, we will improve the appearance of our streets and save buildings from destruction. The funds raised by placing brandmauers on such facades can be used for reconstruction and restoration of historical and architectural monuments. This is an effective way to increase the attractiveness of our cities and create an image of developed tourist centers. There is no need to discover the continents again. It is enough to borrow European experience and apply the practice of combining large-format outdoor advertising with historical and architectural complex of large cities.

Paint on a wall

Many cities in the United States have a unique type of external large-format advertising - painted brandmauers. They are painted on walls of houses, portraying lines, curves and shades with incredible accuracy. Unfortunately, the economic crisis has reduced the number of such objects. However, it is quite possible that over some time such advertising will be reborn. 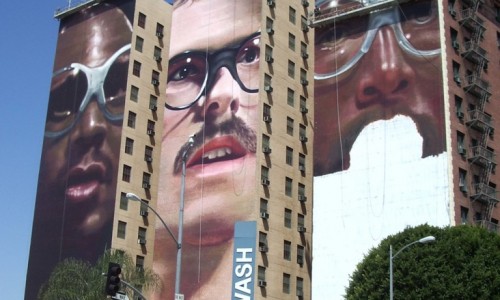 Painted brandmauer is not new for Kyiv. Just recall the mosaics with faces of children on Strilets’ka Street or the huge panel on Peremohy Avenue.

Now all that is left is to adapt this type of painting to the needs of advertising market. It is possible that many old Soviet houses will soon be repainted with new colours, and residential areas from grey and boring will turn into colourful and cheerful ones.

The original idea hit the Starz movie studio is the USA.  While advertising the second season of the television series "Da Vinci Demons", they used a non-standard large-format construction with a remote element. Leonardo da Vinci is portrayed here with wings, which extend beyond the advertising surface. 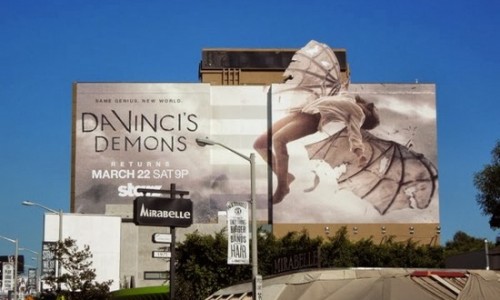 Such an idea was also used to advertise the popular series "Law and Order". Here the external illumination serves as an illustration for the film plot. 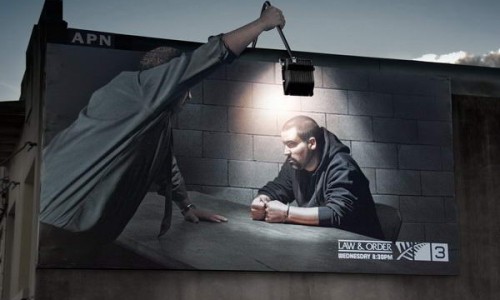 Sometimes it is enough to add one original detail to turn a familiar large format design into something original and catchy. For example, the real chains in deodorant advertising give the image volume and attract attention. 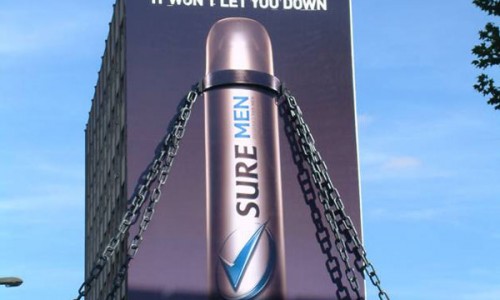 In unity with nature

Often nature itself creates unique opportunities for non-standard advertising. You only need to use its capabilities in time and get the most out of it. 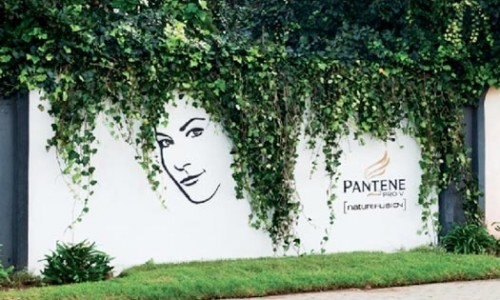 Given the fact that our capital and other cities are drowned in greenery, it can be used as a plus with outdoor advertising, creating a unique symbiosis of man-made sheets and natural framing.

The new type of non-standard outdoor advertising - double advertising - is gaining popularity in the world. This allows you to stretch advertising on two or even three media objects. For example, the Mini advertising is placed next to the billboard of surfing brand Malamalama. Moreover, the last one is a fake, which was specially invented for the original advertising campaign. 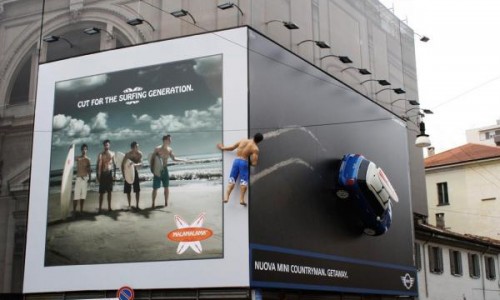 Giants in a metropolitan city

Metropolitan cities are the perfect environment for large formats. Skyscrapers, which are striving upwards, and dimensional structures are excellent surfaces for advertising constructions. It is no wonder that in the heart of such cities many designs of outdoor advertisings find their place. Times Square in New York City impresses with its abundance of vertical and horizontal brandmauers in close proximity to each other. 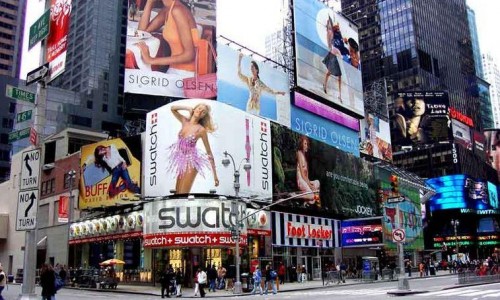 Hong Kong's crowded shopping district Mong Kok is the best place where a consumer can focus his eyes on an advertising product. There are plenty of examples of large format advertisings here. Without it, this part of the metropolitan city would lose its distinct and unique entourage. 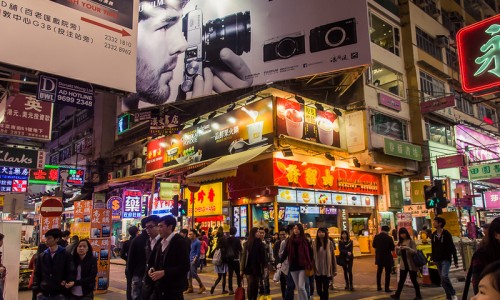 Shanghai, which has been the symbol of urbanization and modern pace of business life of the big city for a long time, is not behind in this also. 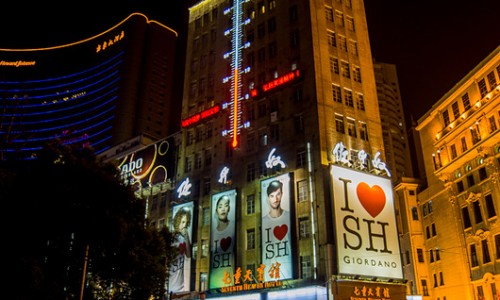 Nevertheless, even a plain urban landscape can always be used with maximum benefit and creatively converted. The multistore house, where advertising of the manufacturer of paints is placed, can be used as a great example. 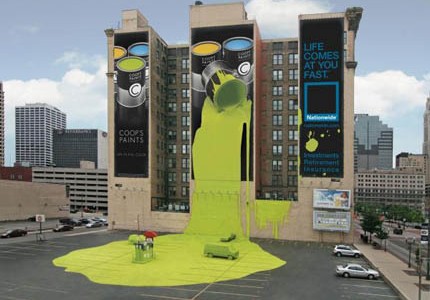 However, outdoor advertising has long since become a race for ideas in developed cities. Everyone is trying to show oneself in an original and innovative way. Often, such innovations are really impressive.

For example, in the center of Milan, shocked viewers noticed part of a body and an end of a huge submarine sticking out from ground. It turned out to be an element of advertising campaign of one of the largest insurance companies in Italy. The slogan "Anything can happen" is materialized through a non-standard advertising design. 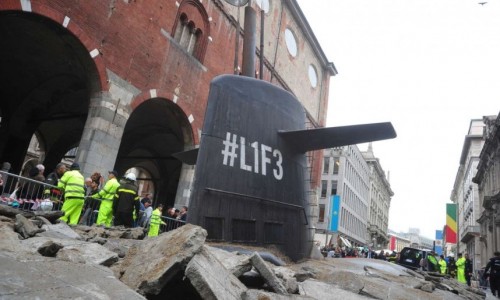 An unusual phenomenon is three-dimensional drawings on asphalt, which have become popular since 2011. Today they are widely used for advertising purposes. 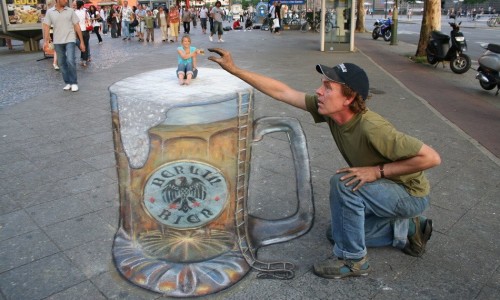 Moreover, at the British airport “Heathrow”, creative designers have developed an unusual brandmauer in the form of a fridge, with special magnets are attached to it. The non-standard design is perfectly done and now many international brands stand out vividly on this construction. 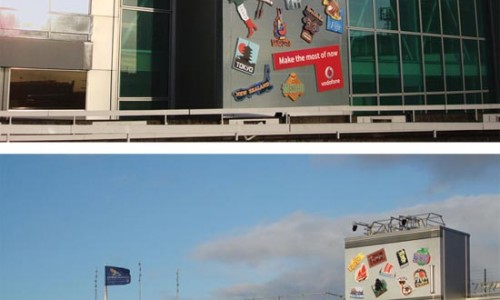 In such an unusual way, environmentalists have decided to remind people about the threat of global warming. A picture with special design is glued at the bottom of the pool, which creates a voluminous illusion of a flooded city. The sight is really impressive. 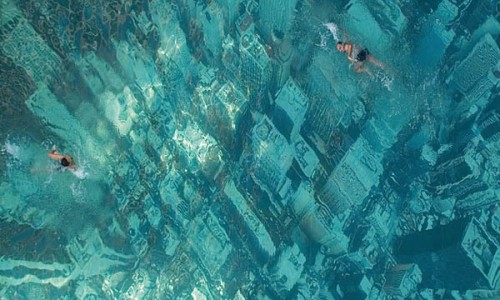 Creativity comes to the town

Fortunately, Ukraine is actively adopting foreign experience in large format outdoor advertising. Even though we are still behind the world leaders for some years, but gradually we understand that a consumer needs unusual, interesting advertising, instead of plain slogans or standard pictures. A typical example of creativity was shown in the electronics manufacturer’s brandmauer, where the theme of its vicinity with a competitor was played well. 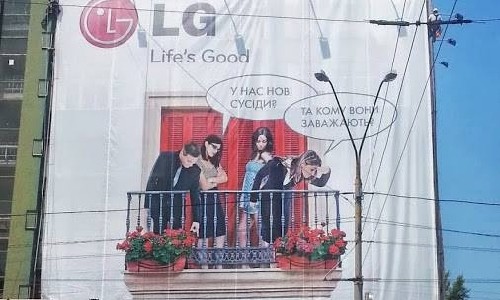 New forms of large-format outdoor advertising, which gradually appear in the capital, are pleasing to an eye. Among other things, there are non-standard three-level brandmauers, branding of bridges, unusual street advertising medias. 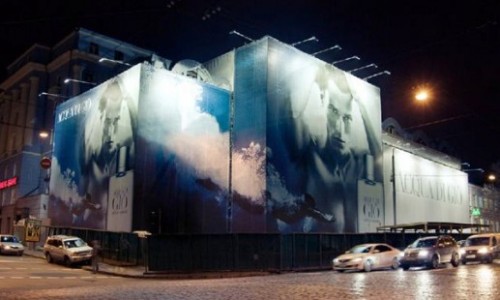 Not far away is the time when large-format outdoor advertising will be perceived as an integral part of urban environment. It will become not only a way to effectively promote goods and services, but also it will be an object, which attracts and pleases eyes of residents and visitors of the city. We are on the right way.